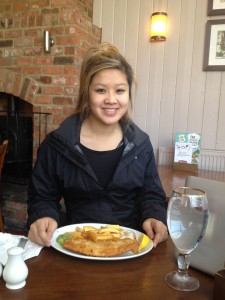 INTO’s Michelle digs into some fish and chips.

British cuisine is a strange and mysterious thing to many international students. Why do Brits eat Yorkshire “pudding” as part of a main course? What’s a “banger”? And is there really such a thing as “pork scratchings”?

So we thought we’d ask Michelle Cheng, a Chinese-American exchange student interning with INTO City University London, to give you her rundown on some traditional British food…

When I found out I was coming to London, I had so many questions in my mind. Does it rain all the time in the UK? Does everyone talk in a British accent? And do people really drink a pint in the middle of the day?!

But my main question was – is the food good? I realised that the only way to find out would be to try it. Here’s my review of some classic British dishes: 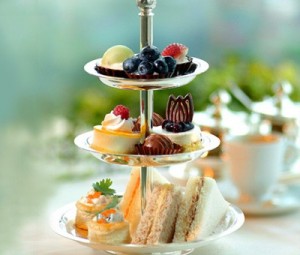 1. Afternoon Tea
Before coming to London, I rarely drank tea. But when I noticed British people adding milk and sugar to it to make it taste better, I started drinking it every day! A really special experience was having afternoon tea in the garden of the Crowne Plaza hotel with my friends. We had scones, sandwiches and desserts – it was delicious.

Full English breakfast. But the big question is – will you have it with red or brown sauce?

2. Fish and Chips
Now one of my favourite British foods! I tried it in the pub in my first week in London and have probably had it about five times since then.

3. Full English Breakfast
My friend and I tried this in a cafe at the end of our street. I was surprised to see so many different things on one plate – eggs, hash browns, sausages, bacon, beans, mushrooms and black pudding! Sadly, I wasn’t a big fan but everyone visiting the UK should order it at least once.

4. Sausage (“Bangers”) and Mash
This is a simple dish but it’s really popular over here – my British friends often order it in the pub. I didn’t think it looked that special but it’s actually pretty tasty and also easy to make. 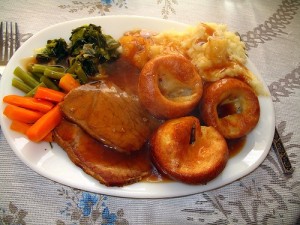 5. Roast Beef and Yorkshire Pudding
This was unlike anything I’d ever tasted before. The roast beef was really good but I didn’t really like the Yorkshire Pudding (which is a sort of savoury pastry). I’m glad I tried it though.

6. Chicken Tikka Masala
Of all the food I’ve tried here, this British-Indian classic has become one of my favourites. I never ate Indian food in the US but now I have it whenever I can. I really hope I can find this in Boston…

Trying all of these British dishes was a really fun experience – I recommend that you sample them all!

Find out more about studying at INTO City University, London.

Read about an American student’s experiences of classic Chinese street food. Or see more classic British food on our Pinterest.