Just what is it with bizarre student trends these days? In the past 18 months we’ve had “planking” (lying down in random public places), “owling” (squatting in a high spot while gazing owl-like into the distance), “batmanning” (hanging upside down in odd spaces) and now, perhaps most weirdly of all, “milking”.

We try to make some sense of it all…

A week ago, students in Newcastle released a video where they showered themselves with milk in various public places. For no reason at all. Since then, it’s had over 350,000 YouTube views and has spawned copycats worldwide. It seems that people can’t get enough of watching students pull off-the-wall pranks on camera.

“Milking” (well, Cleopatra bathed in it so maybe it’s not so crazy).

But the question is – why? Why are these trends taking off like prairie tornados before being replaced by newer and weirder ones? 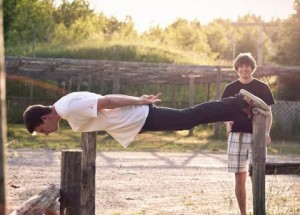 “Planking” – a senseless act for a sunny day.

Maybe it’s because this kind of stunt is based on visual humour, so it connects easily with a global audience. It doesn’t matter which language you speak – you can see what’s funny (or not) about someone showering themselves with a carton of semi-skimmed at a bus stop.

Or maybe it’s a spin-off from flashmobbing – the idea that you can do something out of the ordinary in a public space just for the heck of it (like our INTO Gangnam style flashmob video).

Or perhaps it’s just that students have always played pranks but now, in the YouTube era, these pranks can spread virally instead of just being based on a particular campus.

Whatever the reason, we’re now part of a worldwide internet community that makes it possible to perform a pointless act, film it, and share it with the rest of the planet. So whether you think that “milking” is funny or incomprehensible, the speed at which it has taken off is kind of exciting.

“Owling” in a pink room. And why not?

Because if a student in Kuala Lumpur can turn on their laptop and watch a student in Manchester doing their best owl impression on YouTube, then suddenly, the world seems wonderfully small. And we don’t think that’s such a bad thing…

See our list of 5 of the best student pranks and flashmobs.

What do you think of student trends like “milking”? Funny, dumb or irresponsible? Tell us here.

(INTO doesn’t recommend attempting or duplicating any of the acts described above).